The Scottish Government used an Urgent Marine Conservation Order (MCO) for the first time at the end of 2014, to protect a fragile ecosystem in the sea off Arran.

Environment Secretary Richard Lochhead made the order in response to fishing activity that could damage maerl beds within the South Arran Marine Protected Area (MPA). Announcing the Order, Mr Lochhead said such fishing activity was in breach of a “voluntary agreement between Marine Scotland and the fishing industry”.

“Maerl beds are crucial to the biodiversity of the marine environment in this area”, he added, “and scientific evidence shows that dredging can destroy significant proportions of these delicate habitats in just one pass of the gear.”

Living maerl is a fragile, purple-pink, rocky seaweed that grows unattached, forming colourful spiky ‘carpets’ on the sea floor. Many bivalves, urchins, sea cucumbers, anemones and worms live on, amongst and under the maerl.

Maerl beds are one of Scotland’s Priority Marine Features: a list of 81 habitats and species which are considered conservation priorities in Scottish seas. Maerl beds are particularly good places for juvenile animals to hide from predators. Young scallops, for example, show a strong preference for living maerl beds as nursery areas.

Protecting our maerl beds therefore helps to sustain scallop fishing, a commercially important fishery on Scotland’s west coast. Ironically, scallop dredging causes significant damage both to maerl beds – by breaking up and burying the thin surface layer of living maerl – and to the wildlife they harbour. 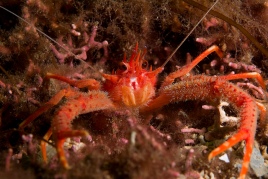 A rugose squat lobster in a maerl bed, © SNH/GrahamSaunders 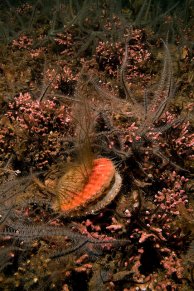 Maerl can also be damaged by other kinds of seabed disturbance, such as by heavy anchors and mooring chains. The MCO prohibits a range of activities across relevant parts of the site, including the use of fishing gear, for one year or until replaced by permanent legislation. However, the Order has not affected fishing boats that were already following the voluntary arrangements for the MPA.

A public consultation on statutory management measures for a number of MPAs closed earlier in February and Ministers are now considering the submissions made. The consultation included consideration of maerl bed management in several MPAs around Scotland, including South Arran, Wyre and Rousay Sounds, and Wester Ross.

Scottish maerl beds represent about 30% of all maerl beds in northwest Europe.  Maerl is extremely slow growing and it’s thought that some of our more extensive beds may be several thousand years old. Living maerl on a bed that can be destroyed in minutes, takes many years to recover, if at all.

You can find more information about Nature Conservation MPAs, Priority Marine Features, the MCO and maerl on our website.