Trees for Life is an award-winning conservation charity working to restore the Caledonian Forest, and all its constituent species of flora and fauna, in the Highlands of Scotland. Here, the charity’s founder and Executive Director, Alan Watson Featherstone, provides a brief summary of what has been achieved during the past 25 years.

2014 was the 25th anniversary of practical work being carried out by Trees for Life to help restore the Caledonian Forest, so this is a good opportunity to look back at what the charity has accomplished in the past quarter century.

Focussing on the native pinewood remnants to the west of Loch Ness and Inverness, Trees for Life began work initially in 1989 by protecting naturally regenerating Scots pine seedlings on two private estates in Glen Cannich. Our first significant project though was in Glen Affric in 1990, where, in partnership with Forestry Commission Scotland (and with part funding from SNH’s predecessor, the Nature Conservancy Council), we deer-fenced the 50 hectare Coille Ruigh na Cuileige site, to enable the estimated 100,000 naturally-occurring Scots pine seedlings there to grow successfully without being overgrazed. That area, on the periphery of the Affric pinewoods, was in serious decline at the time, but now contains a healthy new generation of young trees, as evidenced by these two photographs taken at the site, 25 years apart (1989 and 2014). 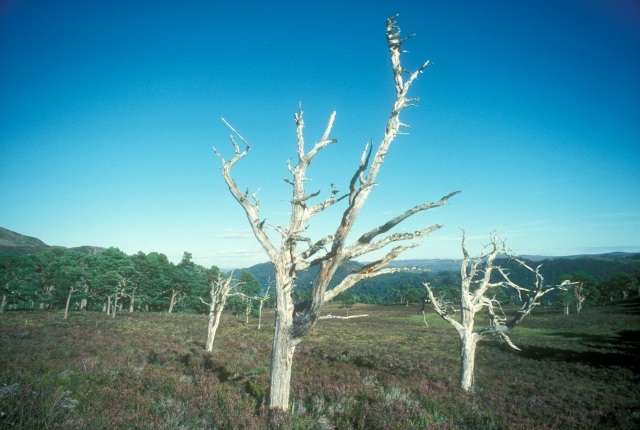 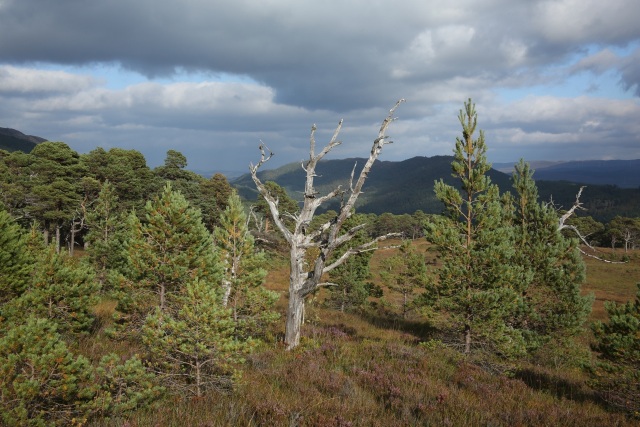 That initial project of natural regeneration was complemented by planting trees in areas where the forest had vanished completely, beginning at Athnamulloch in Glen Affric in 1991, again in partnership with Forestry Commission Scotland. Scots pine seedlings were planted by volunteers in an area where pines had grown relatively recently, in patterns and at densities that mimic the spacing of trees in a regenerating woodland.

This site, also protected by a deer fence, has flourished in the decades since then, with not only the pines growing well, but also understorey plants such as heather and bog myrtle benefitting from the exclusion of deer, and providing a dramatic contrast with the desolate, peat hag-ridden area outside the fence (photo below). 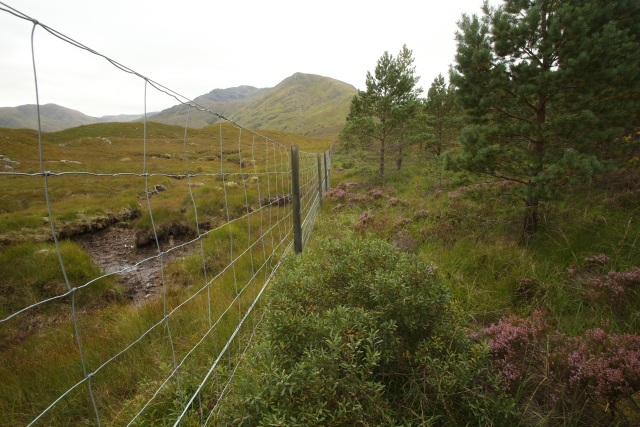 Those young pines, plus the birch, rowan and eared willows that have sprung up there of their own accord, are now supporting an abundance of insect life, which, in turn is providing a food source for birds. Excitingly, this includes black grouse. Several black cocks have been recorded in the area in the past 3 years, and they are on the leading edge of an expansion of the species’ range to the west in Glen Affric, as the new native woodlands provide an expanded habitat for them.

From those small beginnings our work expanded year by year, and by establishing partnerships with other landowners, including the National Trust for Scotland at West Affric, the RSPB at Corrimony, and various private estates, we reached a milestone of a million native trees planted in 2012. Almost all of those had been done by volunteers, as part of a programme of Conservation Weeks  that take place every spring and autumn.

Thousands of volunteers have taken part in these over the years, with many people returning time and time again, because they find the experience so positive and meaningful, providing them with the opportunity to make a positive difference to the land and wildlife in the Highlands. We also run volunteer Conservation Days and offer long term placements of one to three months for volunteers at our Dundreggan Conservation Estate in Glenmoriston. 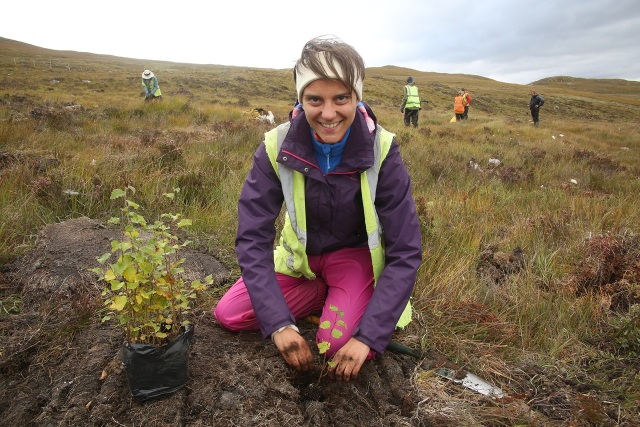 The purchase of the 10,000 acre Dundreggan Estate in 2008 marked a major turning point for the charity, as it provided us with the opportunity to establish a comprehensive and integrated long term forest restoration strategy for our own land. Dundreggan  is strategically situated at a ‘biological crossroads’ where more westerly species overlap with those that predominate further to the east, making it exceptionally rich in terms of its biological diversity.

Over 3,000 species have been recorded there to date, including 10 that have not previously been found elsewhere in the UK, and leading to it being described as a ‘lost world’. Dundreggan also provides a unique opportunity to restore a habitat corridor of native woodland and scrub from Glenmoriston over the hills to Glen Affric to the north, as it includes one of the largest extents of dwarf birch (a key part of the montane scrub community) in the country. 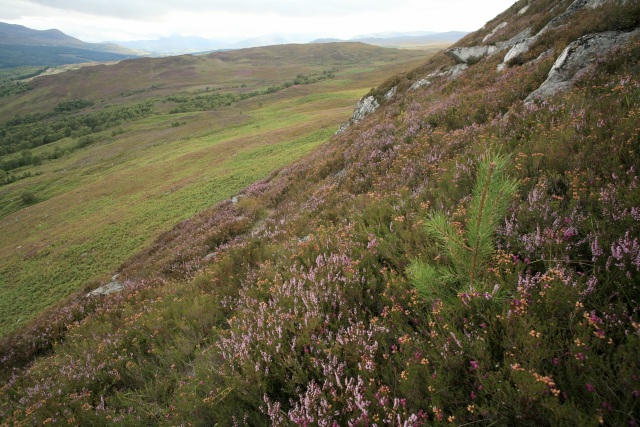 Scots pine seedling near the summit of Binnilidh Bheag on Dundreggan, with a view west to the riparian woodland along the Allt Ruadh watercourse 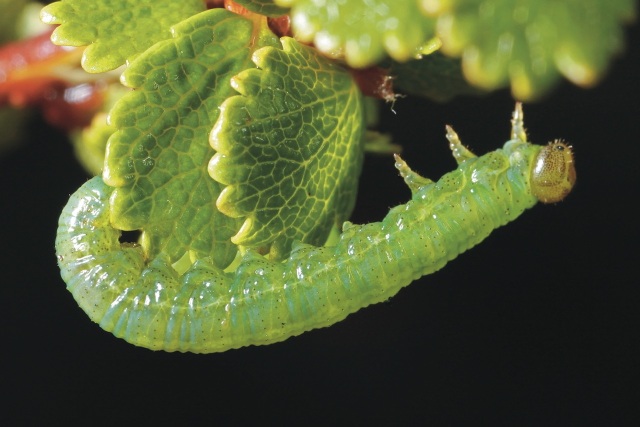 Now, as we begin our second quarter century of practical work, our initiative is entering an exciting new phase. Current projects include planting our second million trees by 2018; the renovation of the Athnamulloch bothy in Glen Affric, as a base for our volunteers to extend the Caledonian Forest further west by planting more trees there; an expansion of our area of work to sites outwith our traditional core area west of Loch Ness and Inverness; and the launch of a new project focussing on some of the key wildlife species in the forest.

Our Founder’s Blog also features regular articles and photos about the ecology of the Caledonian Forest and the work of the charity. 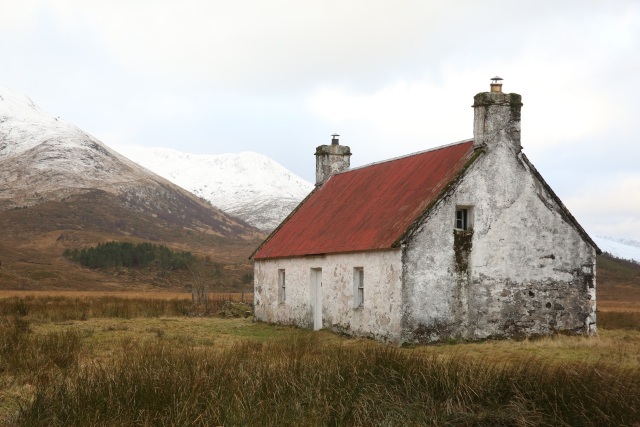 The Athnamulloch bothy in Glen Affric will soon be renovated in a partnership between Trees for Life and Forestry Commission Scotland).

All images courtesy and © Alan Watson Featherstone/Trees for Life.