Tweet of the Day was a hugely popular BBC Radio 4 production that went out just before 6am each morning. In a brief 90-second programme the essence of a different bird was captured in song and narration. Listeners would hear the bird singing and a little bit of narrative about the bird, often delivered by a celebrity.

Now captured in book format, the paper version doesn’t deviate too far from that successful formula. Obviously the printed book lacks the audio, but the short, sharp summaries of each species are beautifully crafted, and the illustrations by Carry Akroyd are simply stunning. Compiled by Brett Westwood and Stephen Moss this is a wonderful addition to any nature book shelf but particular for those with an interest in birds.

All of the Scottish classics like crossbill, crested tit, golden eagle are there and much, much more besides.  This is a book that is equally enjoyable whether you read it cover to cover or simply dip in and out as a species grabs your attention.

Whilst Tweet of the Day looks at over 200 birds, H is for Hawk is essentially a one bird study. Nonetheless it is very interesting and wide ranging read about a single species – the goshawk – and the myths and assumptions that lie behind a fabulous raptor. The author – Helen Macdonald – has been recently bereaved and as she comes to terms with life without her father seeks to train a goshawk. Despite having had a life-long interest in falconry, she had previously shied away from this particularly challenging hawk. However, when she does acquire a goshawk she gains an intimate insight into the world of one of our most spectacular birds of prey. There is inevitably a lot of detail about other elements of nature and the writing is hugely enjoyable.

Otters are the subject of a beautifully produced book by Birlinn titled ‘Otters, Return to the River’. Featuring the superb photographs of Laurie Campbell and the telling words of Anna Levin the book is not only a study of the otter but of the work of one of Scotland’s leading and best-loved natural history photographers. Laurie has been following the fortunes of otters on the River Tweed for a few decades now and his admiration for these engaging mammals shows through very clearly in his wonderful images. One of Laurie’s strengths is his desire to portray the wildlife on his doorstep, and around Scotland, and his superb field craft and eye for a picture are now finely tuned. It shows in this lovely book. 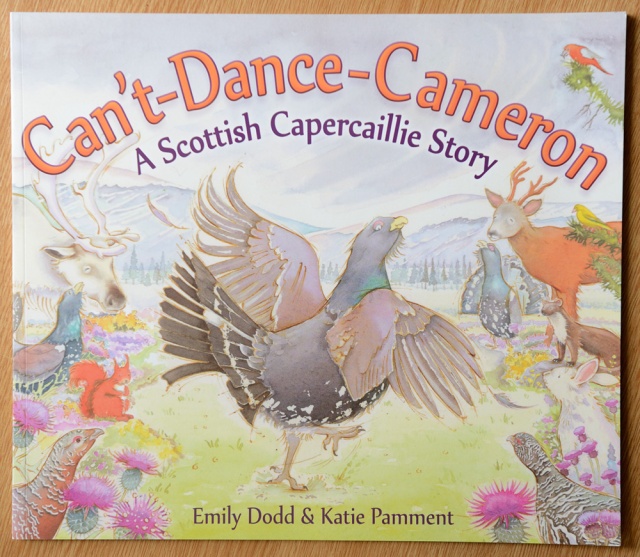 Finally for younger readers Can’t Dance Cameron is a great tale to get toddlers interested in nature. Set in the Cairngorms National Park the book introduces youngsters not only to the Capercaillie and the lek, but also to red squirrels, pine martens and wildcats. Without wishing to spoil the story, Cameron the Capercaillie can’t dance which is unfortunate as his family, the MacFeathers are the best dancers in the Cairngorms but sadly, when Cameron wiggles everyone giggles. Cameron meets a new friend, a red squirrel called Hazel Nut who takes him on a journey through the forest. Lovingly illustrated this is a fine example of how children can be subtly charmed by the wonders of nature and that not all stories need to feature overseas exotica.

With winter nights approaching there are clearly some good reads out there … regardless of age.