Back from the brink

Kelly Ann Dempsey, an Environmental Project Officer with Angus Council, has been working on rescuing north-east Scotland’s fragmented Small Blue butterfly population. Here she gives us an insight into what is entailed in this kind of work.

The Small Blue is our smallest resident butterfly. Although it can be found from the tip of Northern Scotland right down to the south coast of England, colonies tend to be isolated, with many in coastal locations and numbering fewer than 30 adults.

Along with the rest of the UK, Angus in North East Scotland has suffered butterfly declines, but still has some of those isolated populations of the Small Blue. Surveys looking at the UK’s smallest butterfly have been carried out at locations along our coastline since the late 1970’s and although records of Small Blue are numerous, important data on the distribution of its sole food plant — Kidney Vetch — have been missing. 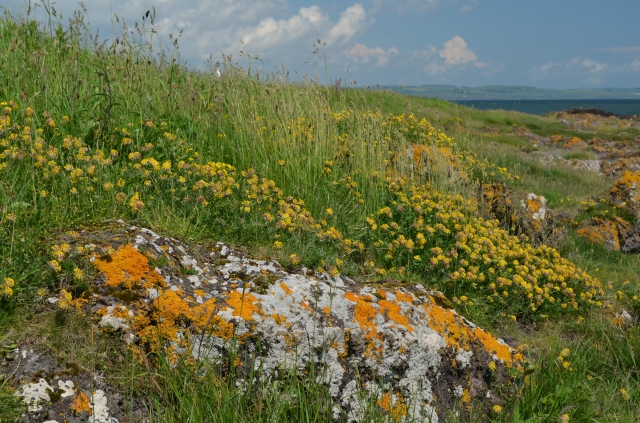 However, to put that right, since 2012 Butterfly Conservation Scotland and the Tayside Biodiversity Partnership have worked together to help annual volunteer surveys of both the butterfly and the host plant along the coastline.

Historical data from Butterfly Conservation, together with Scottish Wildlife Trust and Scottish Natural Heritage survey data from both Seaton Cliffs Local Nature Reserve and St Cyrus NNR, has been used as a starting point to focus survey effort. Other sites along the coast have had anecdotal sightings recorded by local volunteers

The small blue only flies for a short period of time mainly in June and July so that element of the work is quite concentrated. Kidney vetch is also inspected for eggs and larvae. The main focus in the future will be will be understanding the nature of kidney vetch and where possible enhancing its numbers at a small number of carefully chosen sites. More regular, widespread surveying of both species is the most important element.

Fixed point photography may be carried out in the future at some sites to understand fully the variability in kidney vetch plat numbers – year on year sites can fluctuate immensely. Land use, particularly grazing, can have an effect on kidney vetch, as can general plant community succession.

An investigation of land use practices along the coastline has revealed that landowners are receptive to the idea of collaborative restoration works. It is really encouraging that 79% of the landowners approached would consider managing land for wildlife as a priority, especially if practical habitat enhancement works can be funded and implemented by a third party.

It will need a collaborative approach if we are to help dwindling Small Blue numbers. The good news is that during 2014, as an in‐kind contribution to the project, Scotia Seeds arranged with local landowners to collect Kidney Vetch seed and are drying and cleaning the seed in anticipation of the Partnership being able to cultivate. Things are looking hopeful at the moment with a few thousand seeds collected.

In 2015 Butterfly Conservation Scotland and Tayside Biodiversity Partnership will be holding an awareness raising/training day. We would like to have people report anecdotal sighting as in previous years but would also like people to volunteer to monitor their own dedicated survey site. We will also be looking at how we can work with St Cyrus NNR where there is potential to perhaps boost small blue numbers and also revisiting one or two coastal sites where there could be potential but we need experts out on site to survey.

The UK’s smallest butterfly is a popular species, and with a little luck the plans outlined above will help the Scottish population in Angus thrive.