A nutritious supper for fledglings is helping to prevent the loss of one of Scotland’s rarest resident breeding birds. Rae McKenzie from our Bowmore office on Islay explains.

Scotland’s red-billed chough population is restricted to the islands of Islay and Colonsay off Scotland’s west coast and has been in serious decline for several years now. Only 39 breeding pairs were counted on Islay in 2013, compared with 95 breeding pairs in 1986.

Conservationists from Islay and Aberdeen University who had been studying Islay’s chough population noticed that the problem seemed to be a poor survival rate for young choughs. Few birds were managing to survive the two to three year period from when they leave the nest as fledglings through to adulthood. 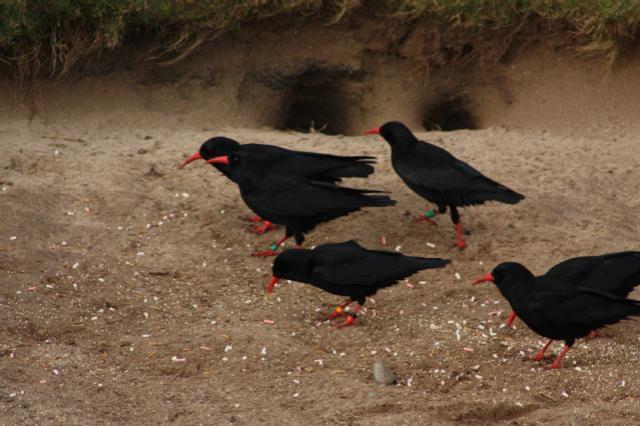 A group of choughs on Islay

To try to help them through these difficult early years and halt the population decline, we’ve been working with the Scottish Chough Study Group and local farmers to provide additional food for the young birds. For the last three seasons, the young choughs have been provided with an additional mealworm snack at their pre-roost feeding areas, before they go to their communal roosts at night.

In 2014 we’ve started to see the benefits of this work. An Islay-wide census of choughs carried out in collaboration with the Scottish Chough Study Group and the RSPB, as part of a wider survey including England, Wales and the Isle of Man, counted 46 breeding pairs. This includes several new pairs of young adults which we have been feeding at the sites during the project.

Islay is also now home to a healthy flock of 40 young choughs, something that’s been missing from the population in recent years. These young adults will be available to breed in coming years.

In the long-term, providing food in this way cannot substitute for better management of Islay’s special habitats, so that a healthy population of choughs can support itself. But, in the shorter term, by providing food we can help make sure that the chough population remains viable and these enigmatic birds retain their rightful place as an important and attractive part of Scotland’s birdlife.

Longer term habitat management to benefit chough is being encouraged through Scottish Rural Development Programme options designed specifically for chough habitats. A number of farmers on Islay are participating in this scheme and the future is beginning to look brighter for Scotland’s choughs.