A Scots-Orcadian take on Eynhallow

Our guest blogger today is Dr. Simon Hall, who has provided a posting written in Orcadian/Scots. Simon works as a teacher in Orkney and is currently seconded to Education Scotland as Scots Language Coordinator. His piece focuses on the marine environment and in the coming months Simon will be providing blog postings on birds and landscapes. 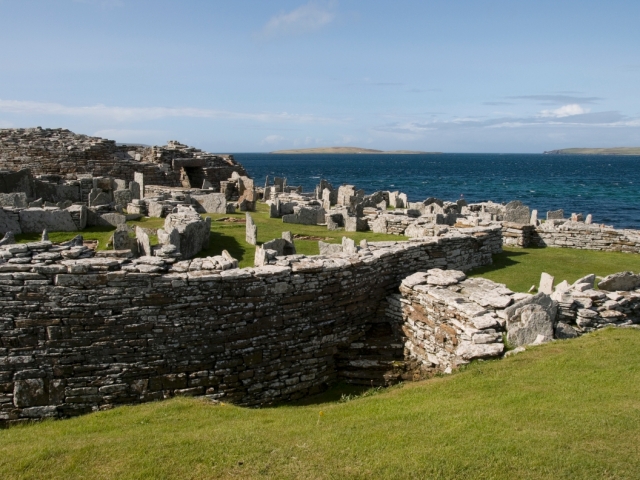 “The local variety o the Scots language here is kent as ‘Orcadian’. Hid’s alive and weel, and there’s no area o language that better demonstrates this than the rich range o words and expressions used in Orcadian tae describe features o the marine environment. Jist tae mak this point, I’d like tae tak ye on an imaginary journey in a sixteen-feet sea dinghy.

“We’ll slip her in the watter at Tingwall in the West Mainland, pull the cord until the auld two-stroke sterts tae rattle and gargle, and head oot north-north-east for the Wyre Skerries. Selikes haal oot on the skerries, and work boats shoot their creels roond here for partans and lapsters.

“There’s some debate aboot the definition o whit a skerry is and whit a holm is. Most folk agree that a skerry is a rock that might or might no ebb dry, and generally doesna grow gress. A holm, on the ither hand, tends tae grow gress and can graze twathree sheep, dependin on the acreage. There are exceptions tae this rule, though, wi skerries in Orkney such as the Pentland Skerries or Auskerry actually bein whit some folk wid call islands. (The Iron Age sheep still kept by some folk in the North Isles o Orkney are kent as ‘Holmies’, because they bide on the holms and feed aff tang in the ebb.)

“If the tide’s ebban we’ll mak good speed doon through Eynhallow Soond tae the Point o Aikerness, whaur folk hiv likely fished fur cuithes since Neolithic times. There’s aye cuithes or sillocks there, fae early summer right through tae December or January, and wi a hand line or a traditional wand ye’ll soon be haalin them in owre the gunwale three or fower at a time. An underrated fish, the cuithe is a bonny olive green above and a creamy white below. The flesh is white. Many o the fish fund in Orkney watters are still kent by Norse names: cuithe or sillock and comper are common fish, and tusk appears fae time tae time in the local shops – hid’s a proper delicacy.

“At the Point o Aikerness the ebb tide can ramp on at sivven or eight knots. In the grimleens o a summer night the watter eddies roond in muckle great whorls, dark and viscous-lukkan, like used engine oil. In the winter, if there’s westerly wind against the ebb tide, it’ll rise up intae a violent, frothy chabble. When the wind reaches forty knots or so, the sea sterts tae smook.

“Ferder oot Eynhallow Soond, in the tidal nerrows atween the isles o Rousay and Eynhallow and the Burgar shore, there’s the Eynhallow Roost. This is a gey dangerous piece o watter, whaur the powerful ebb runs owre an underwater craig, makkan a standan wave o up tae three or fower metres. If the spring ebb meets a westerly gale the roost can be fearsome, and folk hiv droond in it in livan memory.

“In the middle o summer though, it’s peaceable enough as the sun dips doon bonny at the back o Eynhallow at half-ten at night, reflectin aff the hamars in the Rousay hill. It’s true that ‘the west wind goes tae bed at night’. Time tae turn roond an mak again fur Tingwall, haal the boat up, and get home tae fry the sillocks!”