This month the Noss NNR wardens have been joined by a visitor with a very specific mission. Stephen Parker is working on the completion of his Masters degree in Wildlife Documentary Production from the University of Salford. 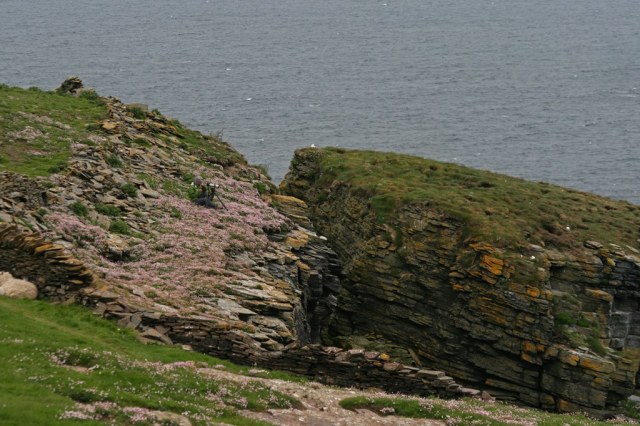 Stephen up close with the puffins. By Katherine Snell

For his dissertation Stephen chose to create a 10 minute documentary following the lives of three seabird species found on Noss. His subjects are guillemots, gannets and puffins.

Each have presented him with their own unique challenges, but it’s fair to say that he’s become rather fond of his puffins whilst gathering footage of them foraging, courting and going about their daily business. One individual has become so familiar that Stephen has said that he looks forward to his morning welcome from ‘Sinatra’- the star of his show! A rough cut sneak preview of some of the fantastic footage he’s captured so far can be seen below.

After his month filming on the island he’ll be editing his footage in preparation for release later this year. He has agreed to inform Scottish Natural Heritage when the final work is completed and available online, so watch this space for further news of this in the next few months.

You can find out more about Noss NNR @ http://www.nnr-scotland.org.uk/noss/