Today’s blog features one of Scotland’s leading natural history photographers – Laurie Campbell.  His award-winning photographs regularly appear in magazines, books, exhibitions and displays. With an impressive array of photography awards to his name it is interesting to note that he works almost exclusively in Scotland, and remains as keen on the commonplace as the spectacular species.

“A recent photograph. Taken primarily to illustrate and share my excitement of having nightly visits of badgers to my office door.”

From as far back into his childhood as he can remember, Laurie was captivated by wildlife. As he got older he was able to explore the wider countryside that surrounded his home town of Berwick-upon-Tweed in the Scottish Borders where he began to improvise all sorts of hides to get closer to the wildlife that fascinated him.

Somehow just telling friends and family about his encounters afterwards wasn’t enough so he looked towards photography as a means of sharing the things he saw. It was to be over a decade before he thought he might make a living from his camera; but from these humble beginnings he was to become Scotland’s first professional wildlife photographer and is still one of the best.

Laurie’s first serious camera was a 1950’s Practika SLR and he developed and printed his own black and white film. It was only when he had the opportunity of photographing a kingfisher that he realised the limitations and moved into colour.

Initially he took various jobs to subsidise his hobby and on leaving school he became a keeper at Edinburgh Zoo. He began photographing the captive animals and sold black and white prints in the Zoo shop. But he yearned to photograph wild subjects where he could be truly honest in what he portrayed.

“I obtain just as much satisfaction from photographing common, everyday subjects such as this grass as compared to rare and elusive ones.”

Although he enjoyed his job, Laurie decided to become a professional nature photographer after a couple of years.

“I felt I could do more for conservation by photographing wildlife,” explained Laurie, “and I’d noticed that the wildlife most people encounter is through the media, such as on television and photographs published in books and magazines etc. So I undertook a four-year degree course in photography at Napier College in Edinburgh. They had never had a ‘wannabe’ nature photographer before but I managed to twist many of the assignments to suit my interest in the natural world.

“The course did not just teach me the technical side but about the aesthetics too. This is just as important. When you are out in the countryside there is a danger of ending up simply shooting ‘record shots’ of different species that all look much the same. But I am just as interested in the shapes, forms and of course lighting is all important. I’ve learnt to cope with just about any weather conditions and try equally to photograph subjects in the landscape, or when it allows, in close up and sometimes as part of an abstract composition. In fact there are an infinite number of ways of photographing any one subject.

An otter eating an eel … “This shot was taken on a river I’ve known all my life and where for decades there were no otters. We need more good news stories like this.

“I am also very keen on photographing animal behaviour whenever possible. Gone are the days when the limitation of large format cameras restricted you to working from hides at nests when photographing birds for example. All the portraits have now been taken and these days there is expectation that nature photographers will come up with a fresh approach. And this need not involve photographing rare or unusual subjects, in fact I regard photographing common, everyday subjects as a challenge simply because I want to present them in a way that will make people sit-up and pay more attention to them. 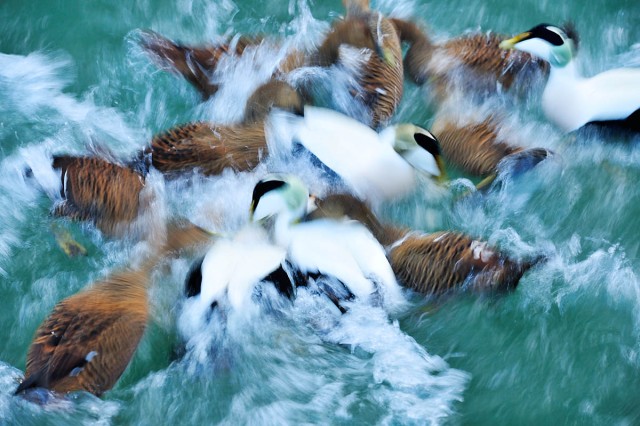 Eiders. Deliberately photographed with a slow shutter speed on the camera to record the movement of these birds as a ‘motion blur’.

“Another advantage of working with common subjects is that you can have repeated, reliable contact with them and it is this that allows you to explore ideas you may have for photographing them in depth. People can relate to common subjects more easily too, and think that they could just as easily do that.”

Being a lifelong, self-taught naturalist has given Laurie a deep appreciation of different habitats and he has strived to document all aspects of nature.

“I have more photographs of plants than every other subject put together”, he notes, “and even when I’m looking for a particular bird or mammal, I’ll still go into the field equipped to photograph just about anything else I discover. I’ve learned to be very selective and to ‘cherry-pick’ the best opportunities, regardless of whether or not it is the subject that I set off to photograph. I’m easily distracted but then being a generalist and receptive to all aspects of the natural world helps me appreciate how whole habitats work.

“Taken at daybreak near the village I live in. This is a site where I first started seeing the return of otters to the Tweed river system over twenty years ago.”

“I now have over 160,000 pictures in my archive but there are still many many gaps. I would love to do more work on cetaceans for instance. But it just comes down to time and nature photographers don’t get to spend as much of that in the field as many might imagine. An ongoing priority is to scan and digitise as many of the key photographs that I previously shot on slide film as I can. I regard many of these as ‘landmark’ images taken throughout my career and besides, some are of subjects and behaviour that I may never see or have the chance to photograph again.

“I resisted going digital for too long when it happened. At first the quality was really only adequate for press photography but glossy magazines still demanded a resolution that early digital cameras could not match. It was only when cameras of ten or more megapixels arrived that digital surpassed film.    … 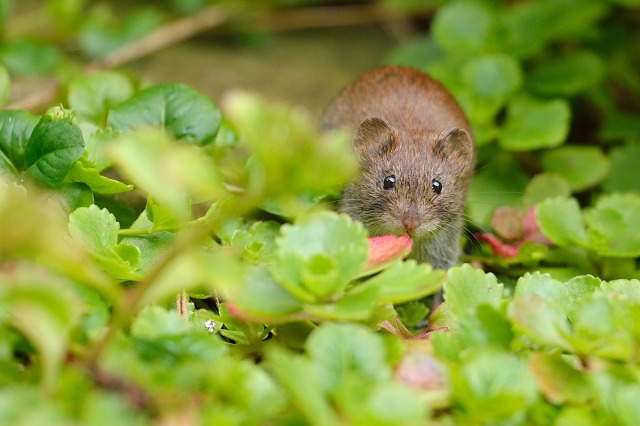