Craig Nisbet is one of the seasonal rangers working on our Noss National Nature Reserve in Shetland. Today he provides a blog looking at the purpose and method of monitoring on this spectacular reserve.

“The Noss wardens are on hand throughout the season to welcome visitors to the island and introduce them to some of the fantastic wildlife that makes the island its home for the summer. Another major part of the wardens’ roll on Noss NNR is to monitor seabird populations on the island. There are numerous established methods of doing this, and all are collated in the Seabird Monitoring Handbook. The method of monitoring the breeding productivity of gannets, kittiwakes, guillemots, razorbills, fulmars and bonxies is to allocate plots within the colony, and monitor those plots annually to assess a proportion of the colony’s breeding success each season. 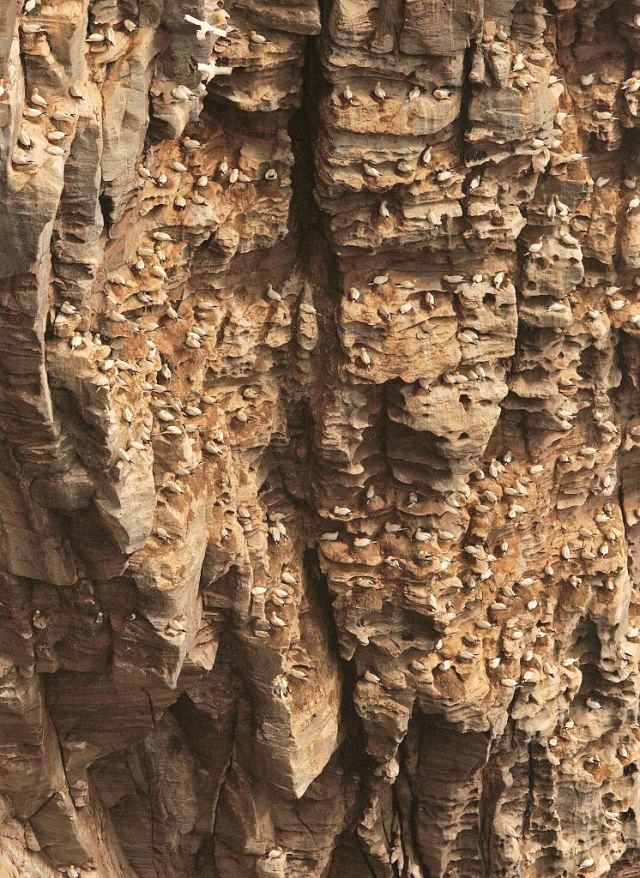 A gannet plot on the cliffs

“As seabird colonies on Noss can often be very large, the entire colonies of 6 key species are counted on a 6 yearly cycle. This year is the year for gannet counts, which requires intensive sessions of counting apparently occupied nests (AONs) both from cliff tops and also from the sea.

“For other species of less abundance, we are required to conduct all island counts. This includes territory mapping for our breeding populations of smaller birds, including skylarks, meadow pipits and wheatears, as well as oystercatchers, dunlin and ringed plover. Gulls and terns are also included, with great black-backed gulls, herring gulls and Arctic terns being recorded and monitored within discrete colonies with individual nests being picked up where necessary.

“Perhaps the most enjoyable monitoring method of all is the all island shag count. This involves circumnavigating the island by boat, carefully checking all caves, nooks and crannies around the coast in an attempt to record all breeding shags, which nest in locations that are only visible by boat. The first of these counts was conducted in early June, during which time we recorded 56 nests.

Shags on a cliff-face nest

“We were also on hand to assist an ailing gannet by freeing it from a loose piece of fishing net, which it had managed to entangle itself in around its neck and feet. Fishing net is a real problem for seabirds, and death is unavoidable in many cases as entanglement prevents them from feeding or flying.

Gannet being freed from netting

“The gannet in question was quickly de-tangled and released close to the rocky shore, where it would be able to recover from the ordeal. We were delighted to see it stretch its wings, demonstrating full movement before we turned the bow of the boat away from the bird and back toward Gungstie.”

A beautiful gannet in flight

Find out more about Noss NNR