Species of the month

The salmon is one of the truly iconic species of Scotland, and its very presence in our waters is a source of considerable pride. Indeed Scotland is home to some of the finest salmon rivers in the world; set in spectacular scenery they are a source of  jobs and income to many remote local economies.

Part dweller in freshwater, part traveller in salt, the Atlantic salmon is a true survivor. It starts its life in the head waters of its natal river before eventually venturing to sea where it then travels thousands of miles to its feeding grounds in the North Atlantic off Greenland, evading predators at all stages before eventually returning to the same river in which it was born to spawn and thus start the amazing cycle over again.

The Atlantic salmon is most recognizable as a majestic silver flanked fish leaping in the pools and over water falls in our rivers as it returns to spawn. It starts life, initially as a fertilized egg buried in the gravel river bed (otherwise known as redds), and then as a newly hatched alevin, an almost transparent tiny fish that lives in the relative safety of the gravel bed from where it hatched from its egg.

It then grows into a small fry before turning into a salmon parr, maybe 10-12cm long which has distinctive thumb prints down its flanks with a single red dot between each. This is so unlike an adult salmon that it was not until the early 19th century that it was realized that this is what it became. Salmon parr feed on aquatic insects and other small water creatures in the river, where they may stay for one or two years.

Before going to sea the parr change into a silvery livery and become a smolt in readiness for the challenges of changing from living in fresh water to salt water. Once at sea they move up into the cold North Atlantic waters off Greenland where they eat smaller fish and crustaceans. They can stay at sea for anything from one year before they return as grilse, up to four to five years when they return as multi-sea winter fish.

Fish that have newly returned from the sea to run up their natal river, are often referred to as bars of silver and highly prized by anglers. After they have been in the freshwater for some time they take on a mottled reddish-brown coloration (fish a long time in fresh water are described as tartan fish). The male or cock fish also develops a prominent hook or kype on its lower jaw, something that female or hen fish never have. Once back in fresh water they do not feed but are focused on making it back to the head waters of their natal river to spawn before most then die, although a few return to the sea as kelts to feed and return a second time to spawn.

Salmon scales are studied by scientists to identify distinct populations

Many of Scotland’s rivers hold salmon, but some are more famous than others. The Tweed, Nith, Tay, Dee, Spey, Helmsdale and others all have their devotees among anglers, who seek to test their fly-fishing skills in pools that hold salmon at certain times of year.

The major salmon rivers all run to the east coast. That’s because the Scottish watershed sits near the west coast, making all the rivers that drain to the Atlantic very short in comparison to the ones flowing to the east. These west coast rivers are called spate rivers where the water level can change dramatically very quickly and affect the ability of salmon to make their way to the head waters.

Scottish hotspots for watching salmon leap are Philiphaugh on the Ettrick near Selkirk, Falls of Shin between Bonar Bridge and Lairg, as well as Buchanty Spout on the Almond near Crieff. For underwater viewing, the Pitlochry fish ladder is a top location.

Better control of river pollution, through big reductions in toxic outflows from different sources, has been a major help to salmon. The Clyde is one of many rivers that have benefited in this way. This seems particularly appropriate, since a salmon features in Glasgow’s coat of arms. 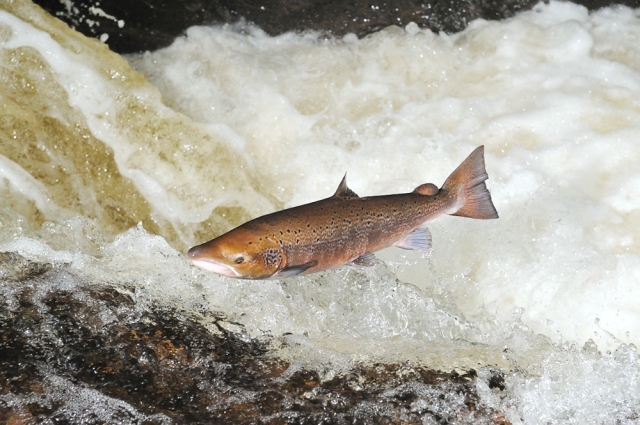 A fish leaping a waterfall on the River Almond, Perthshire

Not surprisingly the salmon features heavily in Scottish cultural references. In literature Neil Gunn’s Highland River novel revolves around a young boy (Kenn) and his first poaching of a salmon.  The story of how Kenn acquires knowledge is said by many to mirror the salmon’s journey back to the source of the river. Equally famous is John Buchan’s story John McNab where salmon fishing plays an integral part in the story of three frustrated sporting gentlemen who adopt the nomme de guerre of John McNab and undertake, amongst other challenges, to poach a salmon under seemingly impossible conditions. More recently salmon were in the literary news when Paul Torday published his first novel Salmon Fishing in the Yemen in 2007, the film became a popular romantic comedy starring Ewen McGregor and of course … salmon.

Further information on salmon on the SNH website here

Naturally Scottish booklet (River Runners) : Scotland’s clean, cascading rivers contain a fascinating array of species. The Atlantic salmon is the best known of our riverine species but others, such a lampreys and freshwater mussels, are frequently overlooked but no less captivating. This booklet aims to illuminate aspects of their intriguing and largely unseen lifecycles, habitats and conservation measures. View the booklet

Event: Saturday 24th May is the first World Fish Migration Day 2014 which is a global initiative to promote awareness of the importance of migratory fish and healthy, free-flowing rivers.  Salmon Homecoming at the David Livingstone Centre in Blantyre is part of the day of celebrations and this family-friendly day will celebrate the return of salmon to the Clyde. Salmon Homecoming is being held at the David Livingstone Centre in Blantyre from 11am-3pm on Saturday 24th May. More information.