Species of the month

The otter is undoubtedly one of Britain’s favourite mammals, and currently flourishing. Seen as being inquisitive, playful and intelligent, they’re magnificent swimmers that are found in coastal as well as inland waters across much of Scotland.

A member of the same family as badgers, weasels, stoats, pine marten and mink, they live in shelters which are often natural cavities by the water’s edge, for example in the roots of a fallen tree, or in piles of boulders. It’s in these ‘holts’ that otters have their cubs, who remarkably are themselves able to take to the water after a mere 10 to 12 weeks. Otters feed mainly on fish such as trout, salmon and eels, although in the spring spawning frogs and toads become important prey. Mammals and birds are also taken occasionally.

Scotland is a stronghold for the otter, in part due to our good water quality and extensive shoreline. Shetland and the west coast are classic areas to see them, but like other top predators they are nowhere abundant, and as a result they do take a degree of patience to spot. It should be noted that although otters can live in either coastal or inland waters Scotland has only one species of otter.

River-dwelling otters are largely (but not exclusively) nocturnal, with each individual potentially occupying many kilometers of the watercourse. In contrast their coastal counterparts are mainly active during the day and, because these waters provide so much fish and crustacean prey, they need much smaller home ranges. Coastal-dwelling otters  need regular access to fresh water – either in streams, or in lochs – to wash the salt out of their fur, which would otherwise rapidly lose its insulative properties.

Scottish legend has several otter references. It has been suggested that, as they often swim in family groups, otters might even be responsible for some of the ‘Nessie’ sightings on Loch Ness. In other quarters it is said that St. Cuthbert became the patron saint of otters after standing waist-deep in the North Sea during his nightly prayer vigils where two otters warmed his feet with their breath and dried them with their fur. In Gaelic the otter is known as Beaste Dubh (black beast) or Dobhran.

The otter is extremely well served by literature. Tarka the Otter by Henry Williamson (which was set in North Devon) was published back in 1927, and arguably it wasn’t until the publication of Gavin Maxwell’s Ring of Bright Water that the otter enjoyed such literary fame again. The story of Mijbil later became a well-received film in 1969 starring Bill Travers and Virginia McKenna. Younger readers were recently wooed by Flibbertigibbet in Otter Moon. Created by Tudor Humphries, a noted children’s book illustrator and wildlife artist, he tells the tale of a young otter on an exciting quest.

Road kill is almost certainly the single largest source of non-natural mortality to Scotland’s otters. For example, an average of around 15 dead otters are reported to SNH staff in Shetland each year, almost all killed by vehicles on the county’s roads. As many deaths will go unreported, the average mortality is likely to be considerably higher. Commercial eel fishing and ‘creeling’ for crustaceans have also been identified as threats in some areas. As a consequence, protective otter guards have been developed for use with eel fyke nets, dramatically reducing otter drownings. 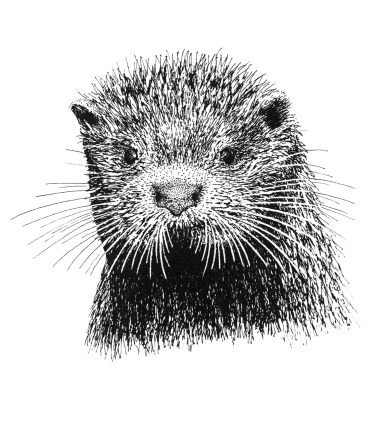 How to recognise an otter : Otters are about the size of a terrier (but with shorter legs), averaging about 70 cm in body length, with a long, stout tapering tail that can add anything up to about 40 cm more. They have a fairly flat-topped head, with small, bright eyes and impressive clusters of pale whiskers that curve down on each side of their face. The fur is dark brown over much of the body and, while their throat and belly are much paler, the animals often look almost black from a distance when they’re wet.
Otter droppings (spraints) are narrow and a few centimetres long. Unlike mink droppings (which smell rancid to the human nose), otter spraint often has a fishy or musky odour that’s not unpleasant, and which reminds some people of jasmine tea.
Otter tracks are about 6cm wide, with five webbed toes and in soft mud you may see their claws and webs. Otters also have clearly defined paths down to the river or coast where there may be obvious slides.

Further reading:
SNH has a free app called Scotland’s Nature that includes a section on the otter. Scotland’s Nature app is compatible with Apple’s iPad, iPhone and iPod Touch and can be downloaded from the iTunes App Store.