Sandy Coppins is an internationally recognised lichen expert and we are delighted that she has agreed to pen a two-part blog for us.  In part one (published last week) Sandy explained what lichens are, now in part two — using Beinn Eighe National Nature Reserve as her ‘classroom’ — she takes us on a ‘crash-course’ on why Britain’s oldest National Nature Reserve is arguably amongst the most dramatic locations in which to enjoy lichens.

Our journey starts on the mountain tops with their stunted, wind-blasted heather amongst open, gravelly ground, low rocks and boulder. Some extraordinary lichens thrive in this, one of Scotland’s harshest environments. 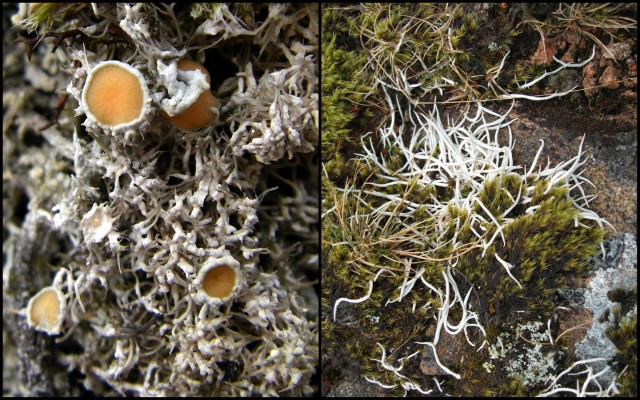 ‘Fish-bones and Apricot jam-tarts’ (left) and ‘Mountain worms’ (right) — amongst the more ‘exotically named’ lichens you can encounter at Beinn Eighe.

Fish-bones and Apricot jam-tarts (Ochrolechia frigida) grows over dead or dying heather (Calluna), forming a whitish covering over the dead heather twigs, with spinules – spiky bits – which resemble fish bones. Occasionally, you will also see small ‘apricot jam tarts’ amongst the white areas. These are apothecia (also known as ‘fruiting bodies’) produced by the fungal part of the lichen; the purpose of apothecia is to produce and release spores, enabling reproduction.

Mountain worms (Thamnolia vermicularis), again, a lichen that can be found in uplands (or occasionally, on exposed lowland dunes, such as at Loch Fleet NNR, where it is a stressed habitat, similar to uplands). Looking very much like clean white worms, with one end distinctly pointed, this lichen is a typical species of uplands, but perhaps in slightly less exposed localised niches.

Mountain worms should not be confused with the much rarer Chalk worms Siphula ceratites, another exposed montane lichen, found amongst small stones, in wettish areas. How to tell the difference: if you pick up a piece of Mountain worms, it is light because it is hollow. Chalk worms is heavy, solid, not hollow, so you can easily discern the difference. BUT: both these lichens are white, really white – do not confuse with the much more abundant species of Cladonia lichens, which can look similar but are always slightly greyish, yellowish or greyish-white (and hollow). Here are some photos to help you see the difference.

Lichens are challenging, but they can also be fun. If you only look out for Mountain worms and Chalk worms, and can feel confident from distinguishing them from the common, widespread species of Cladonia – you are doing pretty well.

Rocks are traditionally great places to find some of our most popular lichens and the high-altitude rocks within Beinn Eighe NNR are no exception.

In contrast to the mountain tops, the low to mid-altitude rocks within the NNR generally support an unremarkable list of lichens. This is mainly due to a combination of the geology (Torridonian sandstone, an acidic rock), and heavy rainfall which increases acidity through leaching. The rainfall also encourages luxuriant growths of mosses, which grow rapidly and out-compete the slower-growing lichens. 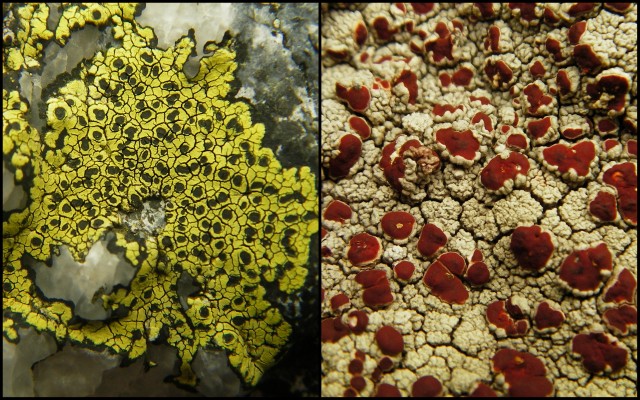 However, at higher altitudes and with different geology, the lichens on rocks (especially lichens associated with mosses growing over rocks) become a far more important feature. There are several very rare lichens, including two species which are known in the British Isles only from the Beinn Eighe NNR, Buellia papillata and Nephroma arcticum, both categorized as Red Data Book species. 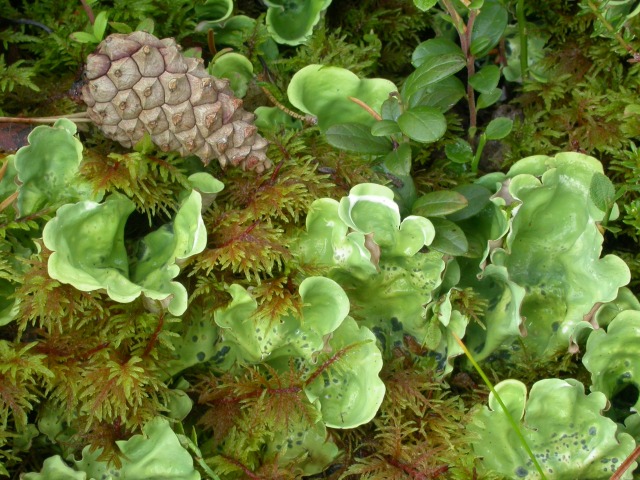 Remnants of native pinewoods (the so-called Caledonia pinewoods) occur at scattered locations across Scotland. Those in the west (such as Coille na Glas-leitire) experience quite different climatic conditions to those further east (such as Abernethy or Rothiemurchus). It is not surprising, that there are also differences in the range of lichens between western and eastern pinewoods. Western pinewoods are also different in that tree species other than pine are not infrequent in the woods – trees such as birch and rowan being particularly a feature. These deciduous trees support different lichens to those on pine, so add considerable diversity to the lichen interest.

Lichens on pine – grannies and bones

At first sight it appears that there are not many, but, it is a ‘niche-hunt’ if you want to see the specialist lichens of pine. First, chose a tree – a ‘granny pine’ is your best bet.

A typical ‘granny pine’ in a sheltered situation on the slopes of Coille na Glas-leitire, has a short, squat trunk, with large low branches, and the bark tends not to be so flaky and readily sloughed as on younger, or taller pines. The shape of these old grannies means that niches such as water-seepage tracks and sheltered, dry areas provide ideal microhabitats for a range of lichen communities. Dead branches (‘snags’) still attached to the trunk provide a valuable ‘dead wood’ habitat.

Strangely, dead pines, the ones that have lost all their bark, known as ‘bones’ can persist for a long time, perhaps 100 years (actually, longer in eastern pinewoods, where it is drier and trees rot more slowly). Indeed, the dead wood habitat of snags and standing or fallen, pine ‘bones’, is the most important specialized niche for pinewood lichens – this is where the species known as ‘old woodland indicator’ lichens can be found.

But don’t expect big showy lichens here……. look instead for what appears to be fine stubble on the dry parts of bones (usually the bases or undersides of leaning trunks or snags). These are the tiny ‘pin-head’ lichens; real specialists of the pinewoods. You will need to look closely, to peer at these partly hidden areas of dry wood, and really you need a magnifying glass or even better a x10 hand-lens.

And when you do see these little pin-heads, en-masse, so neat and perfect, you have found one of the secret specialists of the ancient pine trees. There are ten different species of pin-head lichens recorded from Beinn Eighe, which makes it one of the most important of the western native pinewoods. 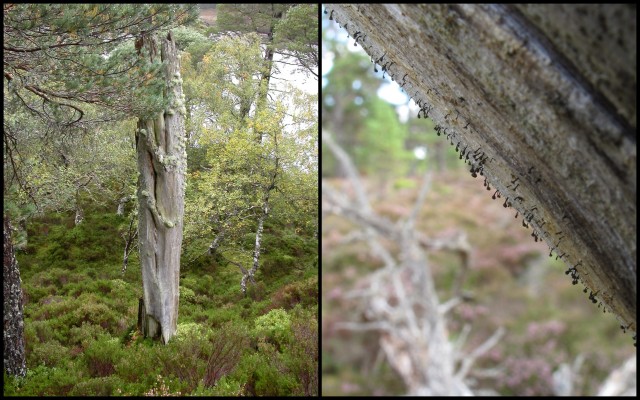 And other trees in the pinewoods …

Rowan trees are important for lichens in western pinewoods – the bark of rowan is quite different from that of Scots pine, and it supports quite different lichen species, such as the pretty Biatora vernalis. And the lovely fresh example of Lungwort, Lobaria pulmonaria), found widely throughout western Scotland on hazel, ash, elm, oak, and can be found in a few sheltered places in the Beinn Eighe woodlands, on rowan, birch and willow. 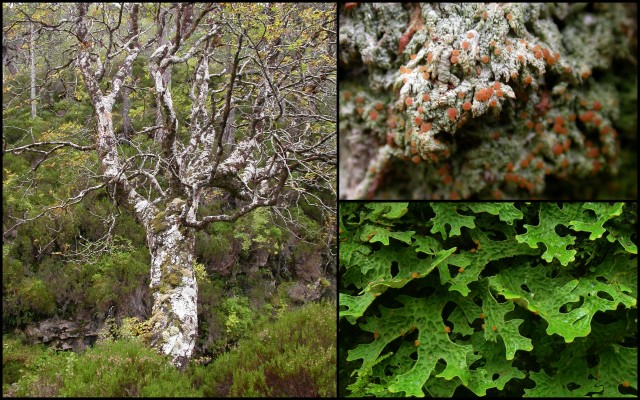 So there you have it.  A crash course on why lichens are stunning, made all the more pleasant by the fact that Beinn Eighe is arguably amongst the most dramatic locations in which to enjoy them.

Further reading.  Our image of Nephroma arcticum on lichen moss-heath was kindly provided by Einer Timdal. His website has a photo gallery and can be accessed at http://nhm2.uio.no/botanisk/lav/Photo_Gallery/

Additional images: Here are some more photos of typical pinewood lichens and their habitats.