Sandy Coppins is an internationally recognised lichen expert and we are delighted that she has agreed to pen a two-part blog for us.  In part one Sandy explains what lichens are, and in part two — using Beinn Eighe National Nature Reserve as her ‘classroom’ — takes us on a ‘crash-course’ on why Britain’s oldest National Nature Reserve is arguably amongst the most dramatic locations in which to enjoy them. 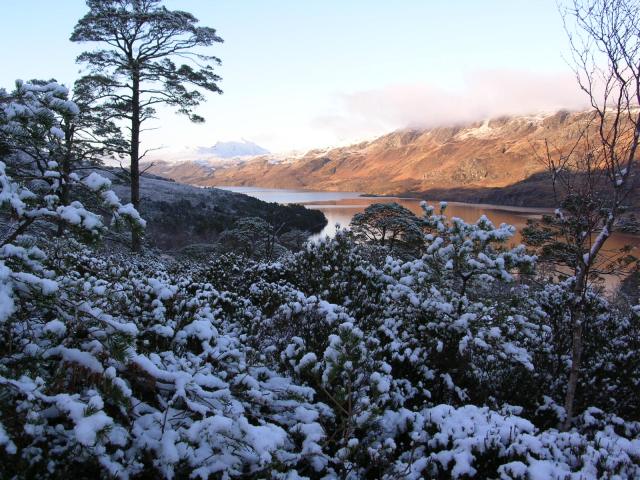 Beinn Eighe is an awe-inspiring and majestic place: stunning scenery, a wonderful sense of remoteness and wildness, and always the possibility of glimpsing red deer, pine martens or a soaring eagle.  The mountains and slopes above Loch Maree (clothed in remnants of ancient pine woods of Coille na Glas-leitire) inspire all who visit. But Beinn Eighe also holds some national treasures that are not so well-known: there are a staggering 435 different lichens recorded from Beinn Eighe NNR. That’s a lot, so why don’t people see them? Most folk are familiar with ‘mosses”, and could readily point them out as they walk along. But lichens?

Lichens are amazingly varied in shape, form and colour. Ask anyone about lichens, and the usual answer is “Oh, very long-lived and indicators of clean air”. Both true but there’s a whole lot more to lichens than that – they are stunningly beautiful, but also enigmatic and curious organisms. They belong to a group of plants known as cryptogams: a word of Greek origins: crypt = Greek for ‘hidden’, and gams = Greek for reproduction, sex. So, cryptogams have ‘hidden sex’. But, they are amazingly good at it, and there are in Scotland alone, something like 1,800 species of lichen, which come in a huge variety of shapes and colours.

Lichens are a diverse group that add colour and texture to our landscape.

What is a lichen?

Just how do you say “Lichen”?  Is it “hitchin’ for lichen” or “bikin’ for lichen”?  Usually it is the latter pronunciation, but there is no hard and fast rule.  A lichen is a combination of two organisms, a fungus and one (or more) alga.  The fungus forms the body of the lichen (the bit you see) and the alga (hidden away inside the lichen body), manufactures the food for both of them.  The alga makes the food by a process known as photosynthesis (another word of Greek origin, with photo = light; and synthesis = putting together). So how does it work? The alga uses the energy from sunlight to combine water and carbon dioxide in the air into carbohydrates (food).

Sounds like the fungus gets a good deal, but in fact, the fungus needs to protect its food-provider alga from

Futhermore, if you are a lichen sitting on a tree, or on rocks and boulders or on the ground in montane areas, just think of the extreme conditions that you will encounter, from harsh summer drought, torrential rain, dense wet fogs, to freezing frost and snow in the winter.

The fungus part of a lichen has adapted to grow to the maximum benefit of its algal partner. So this is where varying arrangements of form and colour come in.  Nobody knows exactly why lichens grow in the shapes and colours that they do, but we can make several educated guesses.

In my next blog I’ll take a look at some individual lichens on the world famous Beinn Eighe National Nature Reserve, starting from the top of the mountain and working my way down to the loch shore.