They maybe haven’t featured amongst Scotland’s Big Five … but mosses and liverworts – known as ‘Bryophytes’ – are some of Scotland’s most fascinating and important wildlife.  Julie Smith is a Natural Talent apprentice with TCV (The Conservation Volunteers) and she takes up the story…

Julie Smith is a Natural Talent apprentice with TCV

I started as bryophyte apprentice with the Royal Botanic Gardens of Edinburgh just under a year ago, and for the past four months I’ve been based at Beinn Eighe National Nature Reserve in Wester Ross.  It’s been the perfect place to develop my skills.  The oceanic climate of the west coast of Scotland means that it rains fairly consistently throughout the year and it’s not too hot in summer or too cold in winter – ideal for mosses and liverworts !

Bryophytes are an extremely old group of plants, dating back some 450 million years.  All land plants have probably developed from the original bryophytes .  They are versatile plants and can be found in woodlands, rocks, tree trunks, and even tarmac!  They provide a nice humid home for a huge number of insects and spiders.

The area around Beinn Eighe is really special because of the number of different bryophytes you find, and the sheer abundance of them.  As well as the rain, high air quality helps too.  There’s a range of different habitats – bog, ravines, heath, broadleaved and conifer woodland and a mosaic of what we call ‘microhabitats’.  Like decaying trees – these can support their own range of species.

Here’s a flavour of what you can find …

Racomitrium lanuginosum  is also known as woolly fringe moss.  It’s the grey moss which forms spongy carpets on the plateau summits of hills in Scotland.  Racomitrium heath is a European protected habitat and Scotland has some of best remaining areas of this habitat in the UK and Europe.  It’s a really important habitat for mountain birds like dotterel and ptarmigan. 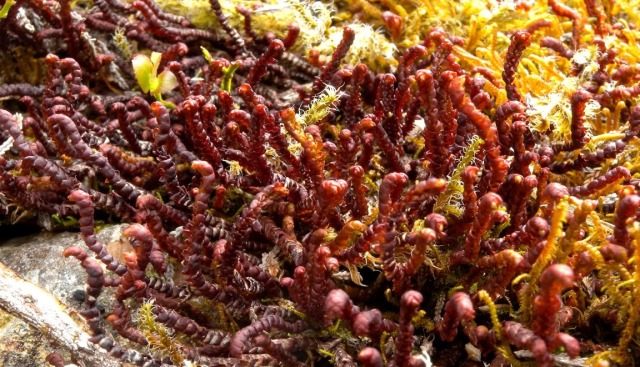 The liverwort Pleurozia purpurea (known as purple spoonwort) is found worldwide, but  it’s nice to see the sheer abundance of this liverwort across the slopes here.  This and Colura calyptrofolia (also referred to as Fingered Cowlwort) are thought to have adapted carnivorous capabilities!  The lobules (small leaves underneath the shoot) have  a sort of flap over them and they contain lots of microorganisms, which are thought to be trapped and not present just by chance.  I’ve noticed lots of tiny bugs called  rotifers in the lobules of Frullania species….but not in many of the other liverworts I look at. 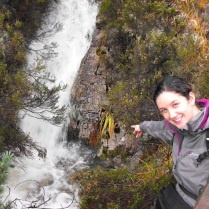 Time to employ the eye-glass with a particularly small specimen 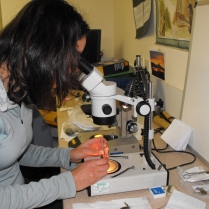 Closer inspection back at the microscope

Campylopus subporodictyon  (perhaps better known as Rusty Bow Moss) is found in a river within the Beinn Eighe NNR and in few other localities in Wester Ross and then again only in the Himalayas.  It is listed on the list of oceanic ravine indicator species….which has been the focus of my main project.

Bryophytes like humid, damp conditions, so the mountainous landscape has lots of shaded north facing slopes, and rivers tumbling through ravines which create fine sprays of water.  This also makes the area good for developing small scale hydro-electric schemes.

I’ve been surveying watercourses in and around Beinn Eighe to help develop SNH guidelines for assessing the likely effects of hydro schemes on bryophytes.  The guidelines aim to help planners by highlighting which streams need a bryophyte survey and which do not, and also by homing in on the ones of international importance.

Although I have not specifically been surveying for proposed hydro-schemes, I have been looking at ravines which have been recognised as potentially being of international importance for their bryophyte populations.  Watercourses are categorised based on the presence of a list of 29 important oceanic ravine indicator species.  Many of the watercourses in the oceanic west of Scotland, which have tree cover and steep sided, shaded sections of gorge, have the potential to be of international importance – But many remain completely unsurveyed.

At the moment watercourses are surveyed on a case-by-case basis for hydro-scheme development applications.  Funding for further surveys of Scotland’s ravines, like the one carried out by SNH in the Loch Sunart area, would provide very useful information on the distribution and ecology of oceanic ravine indicator species.  This would help to inform strategic decision making on a landscape scale.

It’s been great to work in such a wonderful place and help contribute to work that will help look after bryophytes – After all – they’re some of our best wildlife !

Link to SNH planning tool showing the results of all the surveys: