Posted on November 1, 2013 by NatureScot

Hazel is a common tree throughout Europe, but on Scotland’s exposed west coast, it forms a very special type of woodland that we call Atlantic hazelwood. High rainfall, relatively mild winters and cool summers, combined with a long history of woodland cover, have resulted in a type of woodland rich in lichens, mosses, liverworts and fungi. Many of these species have their European headquarters in these atmospheric elfin woodlands.

Visitors to these western woodlands may notice a curious orange coloured fungus clasping hazel stems like a many fingered gloved hand. This is hazel gloves, a nationally scarce fungus that thrives in some of our finest Atlantic hazelwoods. As a priority species on the Scottish Biodiversity List, and focus of attention in SNH’s recent Species Action Framework, hazel gloves is a flagship species that helps identify and raise awareness of some of our most important Atlantic hazelwoods.

Many fungi feed on dead wood, but hazel gloves appears not to live directly on hazel, but on another equally fascinating fungus, the glue fungus. The glue fungus, as its name suggests, glues dead and dying hazel stems high in the hazel canopy (see photos). These suspended stems are often the first indication that hazel gloves is lurking nearby.

The greatest threat to hazel gloves, and the diverse range of other species that live in Atlantic hazelwoods, is loss of habitat continuity through the likes of  coppicing and continuous heavy grazing. For example, if all the stems are removed from a woodland, the hazel will happily rejuvenate from the base. However the many species that lived on the cut stems will have been removed and take a very long time to re-colonise, if they re-colonise at all. 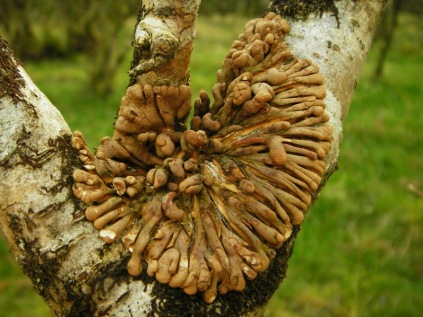 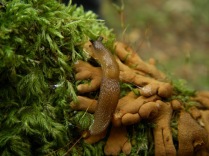 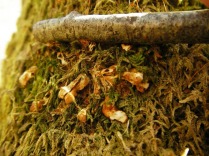 There are survey gaps within the known range of Scottish hazel gloves populations, particularly in Mid Argyll.  SNH has therefore commissioned a hazel gloves survey of this area to identify where the most important hazelwoods are, their characteristics and what condition they are in. We will use this information to priorities management and also assess the potential for Atlantic hazelwood expansion through new planting or grazing management. 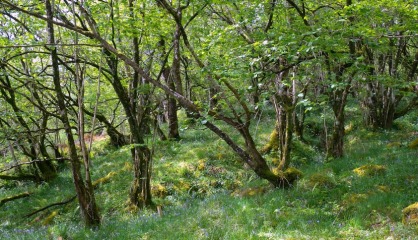 By identifying hazel gloves habitat this project will not only benefit hazel gloves, but also the many other important species that inhabit this ancient and unique woodland type.

Map of the Scottish distribution of hazel gloves:  https://mapsengine.google.com/map/edit?mid=zpD87Pn1snR0.kE0HNppTZH0A&pli=1