Visitors to Rum National Nature Reserve can enjoy the sight of a new foal on the island.  The young filly called Fraoch was born to Stroma in July and is thriving.  As our picture shows the youngster is a real beauty and bound to be a popular attraction on this famous island. 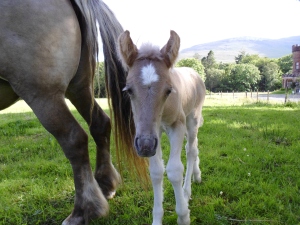 The first written record of the Rum ponies dates back to the famous traveller Thomas Pennant in 1774 and in 1775 they were described by Dr Johnson in his “Journey to the Western Islands” as “very small but of a breed eminent for beauty”.

The ponies were left wild on Rum after the clearances in 1828. Later in 1845 when the then owner ran Rum as a sporting estate the ponies were used for stalking duties. They have been used as stalking ponies to carry deer off the hill from 1845 to the present day.

They are extremely hardy and well suited to the harsh Rum climate. Sure-footed, they have excellent temperaments which make them ideal for their role on the island.

Highland ponies are descendents from ancient Celtic ponies brought by early farmers and very much part of Scotland’s cultural heritage. The Rum ponies still have the strong primitive markings which are not apparent on all highland ponies. Highland ponies are a very versatile breed and have been used in a range of different roles including military operations during Jacobite times, cattle and sheep droving, croft work, driving and riding. 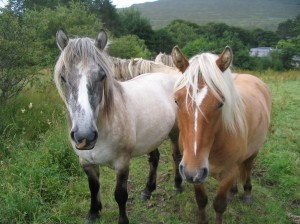 The Rum ponies are of rare ancient bloodlines which SNH conserves through our breeding programme. We keep the female bloodlines pure and never bring in any new blood on the female side. Every few years we go through a very careful selection process to find a stallion that is suited to Rum. We were very lucky last year to loan Benbecula of Moulzie who was just the right height and build for Rum and had an exceptional temperament. He is the sire of the new foal Fraoch.

Why not make a point of visiting Rum National Nature Reserve and seeing these lovely animals first hand ?  You can get a ferry to Rum everyday in the summer.

Rum sunsets can be stunning

For more information about timetables visit the following websites http://www.calmac.co.uk/timetables/calmac-summer-timetables.htm and http://www.arisaig.co.uk/wildlife-cruises.asp