The Allt Lorgy, near Carrbridge, is a typical, spatey, upland burn which had been straightened for agricultural purposes many years ago,  and at the same time had  artificial flood banks and river bank  rock armouring installed, together with in-river boulder placement.

These man made measures made the watercourse into a virtual canal in places, far removed from its original state and appearance.  The new project has seen all of these ‘artificial’ barriers removed with the aim of improving the ecological balance, both in the water and the surrounding area.

Logs and other woody debris were placed on a gravel bar and across the channel, to encourage eddies which have created pools to benefit salmon.  River gravels, which had been historically dredged and built into flood banks,  were placed on the water’s edge so that when the river is in flood the river gravel will return to the system in a very natural way.  Most excitingly, the river will be left to create its own course in future across its flood plain.  This is possibly unique in a river restoration scheme in Scotland. 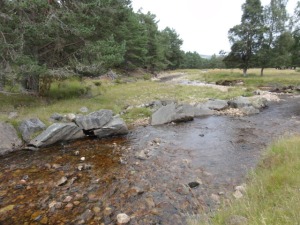 The Allt Lorgy before river improvements

The Allt Lorgy after river improvements

The site has been fenced and planted with native trees, to create riparian woodland – a rare and threatened habitat.  The trees were provided by the Woodland Trust, who also helped with the planting by local schoolchildren from Carrbridge Primary School.

Youngsters from the local CarrbridgePrimary School helped with tree planting

Part of the River Spey catchment, the Allt Lorgy sits on the Seafield Estate and it was back in March 2012 that the scoping study was carried out. Over the summer months the design of the project was approved and work started in September of last year.  No fewer than five artificial embankments were lowered (involving the removal of 900 cubic metres of soil and stone) and one large drainage ditch filled in.  Now the site will be monitored to quantify and qualify the success of the project and take the lessons forward to other similar schemes.

This innovative river restoration project was visited on 29 April by the Minister for the Environment and Climate Change, Paul Wheelhouse and he noted that  “This project at Allt Lorgy will allow the river to restore natural habitats, creating a diverse environment and benefitting a range of species. It will also reduce flooding – a problem which has wiped out salmon spawning habitat over the years – helping the angling industry around the Park.”

“As someone who has had several holidays in Carrbridge I greatly enjoyed helping the pupils of Carrbridge Primary plant trees, and I hope to return in the future to see how their hard work helps restore local habitats.”

The work was organised by Liz Henderson of the Spey Catchment Initiative with funding from the Scottish Government.  It was supported by the Spey Fishery Board, SEPA, Seafield Estates, Scottish Natural Heritage, Cairngorms National Park Authority, Forestry Commission, and the Woodland Trust.