A lot’s been said about the outstanding variety of our animal life since the launch of Scotland’s Big 5 at the end of March.  The discussion has ranged across both social and traditional media and as expected many have disagreed with the five creatures we put forward, together with Visit Scotland, as arguably the country’s most iconic.

Many feathers have been ruffled by the absence of a particular favourite species.  Others have made suggestions for their alternative top five: basking shark, killer whale, Atlantic salmon, greylag geese and of course the handsome puffin are just some of the fantastic animals others have suggested for their top five species.

The five we chose are creatures that people have a good chance of spotting throughout the country over the whole year, but the latter 5 are certainly strong candidates for a more seasonal Scotland’s Big 5. However, the truth is that we are so well off for wildlife in Scotland that we could easily have chosen a Big 50, including the Scottish wildcat, bottlenose dolphins, Arctic skua, pine marten, trout, red kite, and so on.

The main aim of the Big 5 campaign is to encourage people to think about our wildlife and landscapes, as well as getting out to enjoy the incredible wildlife we have here in Scotland.  We want to raise awareness of and get people talking about the wonderful animals that live here.  To this end the campaign is off to a good start and others have been inspired to create their own lists. The Scottish Seabird Centre, for example, have started their own poll and you can vote for their ‘People’s Big 5‘. The following are a few of the other suggestions that have emerged since the launch of Scotland’s Big 5.

Inspired by our Big 5 the Royal Botanic Garden Edinburgh is asking people to vote for their favourite native species of plants and trees.  Favourites so far include Scottish Primrose, Wych Elm, Dog Rose, Rowan and the Scottish Bluebell. 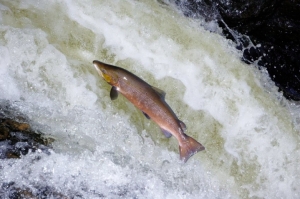 If you’d like to suggest your own list then please do so on our Facebook page and let us know why they are important to you. You can learn more about Scotland’s Big 5 and all our nature and landscapes on our website where you can follow the links to vote for the nation’s favourite animal.  Why not also download our free Scotland’s Big 5 app from iTunes, packed full of great images, video and audio, along with spotting tips and where to see the Big 5 in the wild.